“Perhaps say I love you more, because there comes a day when you can’t say it anymore. Or you say it and don’t hear the reply back.”

Widow of a fallen soldier

When I went into the town of Sevan, a town that hugs the coast of Sevan Lake, it was my first time ever stopping there. I usually would drive by to visit another part of the lake or swim near Shorzha. However, this time I was going to meet a young woman named Mary who was a recent widow from the 2020 war. I had talked to her on the phone to arrange our visit and she had told me that she was attending classes to become a nail technician so that she could make an income for her and her now 8 month old daughter. I was immediately curious and wanted to meet this person who, after losing her husband, had a voice filled with such light, warmth and determination. We would be meeting at her mother’s home in the town of Sevan where she had grown up.

When I came out of the car, I saw a young woman standing with a toddler perched on her hip in front of the old Soviet apartment buildings. She had a small smile on her face with long black hair and large brown eyes. She led us to her home and when we made our way to the living room, there was a large picture on the table of a man with a uniform and medals holding a little girl in a pink dress. A teenage girl who looked a lot like Mary also greeted us and asked if I wanted coffee. I don’t usually drink coffee, which is apparently blasphemous in Armenia, but this time, I decided to make an exception. So we sat on the couch with the coffee cups in front of us.

Mary said, “I have four sisters, all of them are younger than me. They help me with many things. They never leave me alone. Especially during those hard days, they were always next to me.” With some Armenian coffee in front of us and a baby playing next to us, she started telling her story — a story about the many kinds of love.

Join us on this journey.

“I was born in the city of Sevan but at two we moved to Russia, and when I turned 16, we moved back to Armenia. I graduated from university in Armenia and in 2019 I went to Artsakh for the first time to visit my uncle’s house. Sedrak was a friend of my brother’s. He came as a guest by chance to our home during Easter.

Sedrak was a very kind, bright person. He started serving in the army in 2011 after graduating from the Vazgen Sargsyan Military University. He was able to rise up fast at his age. Not many can make it to Lieutenant Colonel at 30! In fact, I wish he was here now so you could talk with him.

“We started to interact after that and it only took us 20 days to know we were supposed to be together. He seemed so հոգեհարազատ, a kindred soul. It was destiny perhaps. We were always surprised by how similar we were with our characters. 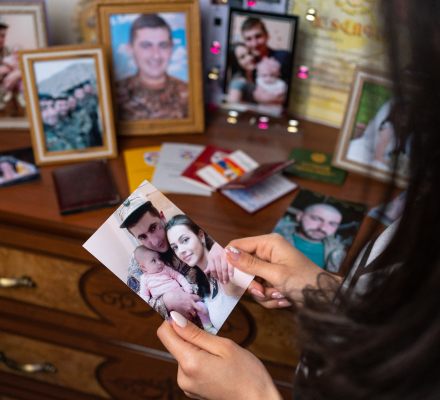 For example there are people who don’t like թթու միրգ (pickled fruit), but we both loved it. If we decided to do something, then we would both do it. He was just that way. Also at work, he was friendly and strict. These are the types of things his soldiers would also be able to tell you about.

“The same year on September 19th we got married and moved to Hadrut where he was serving. We lived there one year and celebrated our anniversary on September 11th. But on the 25th he went to his shift and we didn’t see each other after that.

By this time of our meeting the little baby had gotten tired of exploring all the patterns and toys on the rug and started fussing. Mary had told me on the phone that her baby had the same name as I did, Mane. Mary took her in her thin arms as this bundle of cuteness tried to pry her long hair.

Mary began speaking again: “Mane, she is my strength, she wakes up with her little թաթիկ, paw. She has a lot of love. In fact, she is the fruit of love. Her dad was also eagerly waiting for her. He would say, “You are my princess.” He would say, “When I marry her off, my daughter will stay and live with me.” It was hard for him to accept that he would have to give her up when she was married.

“From the posts on Sundays he would try to come for a couple of hours to see his daughter. He was only able to see her for 3 months before he died. He would be at the posts for 14 days, then home for 14 days. Every time I called him I would say be careful. And he would say don’t be afraid, you should be proud. I am doing this for your future, for your and my daughter’s futures.”

“When the war started we were at our home in Hadrut. They began bombing our home and I was alone with my daughter at home. Sedrak was at the post. At 22 years old, you look around yourself and don’t know what’s happening. The Artsakh people knew what was happening but you don’t know what to do. One of the neighbors had gone and dressed up to go to the posts and he said, “Why are you standing there? Go get your daughter dressed and find refuge or go to the basement. War has started!

“For 30 minutes I didn’t know what was happening. People were yelling and running. You look and it’s like a movie. Houses are getting bombed. That’s what you see from the windows. We left the next day. I had wrapped my baby and we went on transport. Then when we arrived in Stepanakert they started bombing that city as well. With a lot of challenges, we eventually got to Goris. Then we came to Armenia. For two days I didn’t hear anything. Then they said we had some gains but heavy losses. And then he called. When I heard his voice I got so happy. I was always waiting for his call.

“September 30th was the day of his last phone call. At 9:39. Our story is full of nines. I told him, “Be careful,” and he said, “I’ll be ok. God only takes the good ones and I haven’t done much good.” And then he didn’t call again.

“Many people come to us today and say, ;We are alive today because of him. We are so thankful to him.’ They say, “Be proud you have a great husband.’”

“He took out 700 people from Hadrut when it was surrounded. He made the decision to take the troops out. In just a couple of hours the enemy was going to capture and kill them all. In three days at night on foot he took them all out. His volunteers told me. He could have gone by car as a senior ranking person. But instead he came on foot after the last soldier. Perhaps if there were more leaders like him, more people would be alive today.”

The picture of Sedrak’s smiling face kept looking at us from the table. Mary’s daughter Mane also started to look in that direction and talk in her own child-like language.

Mary began commenting on the photo. “This picture emits light. I always get happy when I see it. I feel like he is just at the post and will come home soon. Mané also recognizes her dad and says, “Ay papa”.

She recognizes him too. Our little daughter was 4 months old when her dad died. He died on his 30 year, he was born on October 18th, 1990.

While we sat conversing, Mary’s younger sister would come in and lean on the living room door frame, watching her older sister.

She sometimes brought tissues when tears started rolling down her cheeks, or take baby Mané to another room when she got very curious about the recording device I was using.

Mary began again. “There were people afterwards, therapists, who called me and wanted to talk, if I felt I needed to talk. Perhaps I really need it, because I myself feel it’s important to talk to a professional. I turned 23 after his death, that’s a huge burden on the shoulders of a 23 year old. Raising a child is a big responsibility.

“My family persuaded me that in order to come out of this, I needed to get myself out of it. I wasn’t interacting with anyone or coming out of the house.

They would always say, you need to go and learn so that I would get out of the house. I am a florist but because I don’t have any materials or tools, I decided to learn about nails.

“We had many dreams. We wanted to buy a home of our own. He had a lot of dreams too, to rise in the ranks and to finish his training and education in Russia.
There is this saying, ուրբաթը շաբաթից շուտ եկավ, Saturday came before Friday.

“I decided to learn so that I can make a living and be able to support my daughter. I can’t put my hopes on my mother, she has four other daughters. 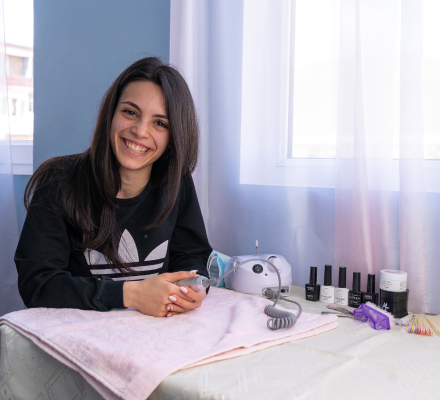 I understand that my mom took us in after Sedrak died since she loves me, but at the end of the day I am a separate family. I am at my mom’s house until I can work and can buy my own house. I have set goals for my daughter and I will realize them by myself.”

Towards the end of our time together, Mary showed me the tools she uses for doing nails. They were set up in the balcony room which also had toys on the floor and Mane’s missing shoe.

“For many years the Armenian people have always been killed and harassed. I also consider this a genocide. Many in this generation were killed, lost, and became disabled. Perhaps that’s why our people are strong. Even though they try to kill us and destroy us, we still get back on our feet.” Looking at her in the light of the window, I said, “Just like you.” She took Mane in her arms as she crawled on the floor towards her mom. She finished our time together with these words: “Value life. Only after losing it do you realize how valuable life is and the things that have been lost. Value every second that you live. Perhaps say I love you more, because there comes a day when you can’t say it anymore. Or you say it and don’t hear the reply back.”

As we descended down the flights of stairs and back into the car, I remembered all the people I loved — my dad, mom, sister, and beloved friends whom I had the strong urge to call. I waved at Mary and Mane who was again in Mary’s arms and they both waved back, Mane gave me an innocent and joyful smile. I remembered the last words Mary said as she talked about her daughter’s future.

“I want the best future for her, so that she can reach her goals and dreams. And I’ll do my best to make those a reality. Because that’s what her dad promised her and I am going to do my best to finish the work he left behind.”